I’m in a bedroom. I’m 10 years old (give or take). There’s a group of us girls. I’m the youngest. The others are family and friends. They’re handing around a book carefully, gingerly, as if it has germs. But they’re reading it hungrily. I’m at the end of the line, keen to see what’s inside. One of the girls (who I don’t know), says: She can’t have it, she’s too young. But I’m family (through the stepkid line). My wonderful 14-year-old rel says, Don’t worry, she’s alright. I get the nod of approval. I feel so honoured. I’m in the in-crowd. I’m handed the copy of Puberty Blues.

At the time it hits me like a tonne of bricks. The language. The brutality of the boys (and girls). The fights with fists. The relentless talk of and desire for sex (even when it seems painful and pointless). The need to conform at any cost. I am seduced and repelled by it. I want to escape this kind of world. I don’t want to go to high school. I escape in a sense (to a girls’ boarding school) for a few years. When I meet boys in their early teens, they may not be surfies but things haven’t moved on (we’re in the 80s now). They communicate with their tongues and their insults. I struggle to remain visible. I want to burst out. My brain’s in here, I want to cry. Can we talk? There’s one boy. I use the word impersonate. He looks at me, dumbstruck. He hops on his BMX and rides off. I decide to keep words to less than two syllables from then on. It’s a habit (dumbing down) that I’ve struggled to overcome ever since.

Years later, and I’m writing my first novel. It has a strong and lively character in the name of Layla. Hers is a voice I inhabit easily. She’s 14 years old. She struts across the page and, as she swans, I remember this earlier, unforgettable voice, from Puberty Blues, and how it has formed and shaped me. Layla goes to school in Western Sydney. She is obsessed with boys. She is desperate to please. She inhabits Facebook and watches video on her mobile, but she’s essentially the same as those girls, the ‘molls’ living on Sydney’s shire fringe. 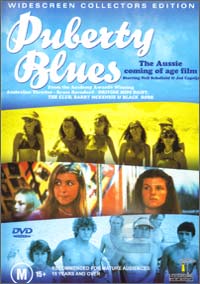 I remember the first film version as being true to the book, but perhaps too much so, a flat narrative that failed to penetrate the landscape. The new version, now screening on TEN, is a series, offering time for some character development and in particular a deeper analysis of the parents and where they fit in. I don’t remember the parents in the book. Perhaps I tossed those pages aside at the time, eager just to get to the good bits. But like all great narratives, Puberty Blues charts more than the lives of the teenagers (and the series explores this beautifully). It inhabits a decade where everything seems possible, where society is undergoing rapid change, where immigration is starting to have an impact (on the ‘white’ cultural values in Cronulla) and where feminism is starting to mean changes for some women (see Susie Porter and Dan Wyllie let it all hang out as The Knights) while leaving others behind.

Glendyn Ivin directed one of the most evocative short films I’ve seen, Cracker Bag (which went on to win the top prize for shorts at Cannes), and his first feature, Last Ride, was a wonderful exploration of childhood in peril (see my RealTime review). He seems to have been the perfect choice as director to launch this ripe mix of teen angst and 70s culture. And unlike Channel 9’s Howzat, this isn’t just an exercise in nostalgia, a chance to wear funny moustaches and parade around in harry high pants, but a serious take on where we’ve come from and where we’re at.

WHAT ABOUT YOU? HAVE YOU READ PUBERTY BLUES OR SEEN THE RECENT SERIES? WHAT DO YOU THINK?

8 thoughts on “Get lost, ya moll! Puberty Blues hits TV”