Simmone Howell’s recent YA novel Girl Defective is a smart and punchy coming of age tale set on the meanstreets of St Kilda. In a record store owned by her dad, Sky negotiates love, loss and a little brother who always wears a pig mask.

Simmone’s narrative voice (in whatever character she is writing) is the kind that you long for, so strong it becomes a part of your own interior monologue, and changes how you see the world for a while. Her dialogue, description and humour are fresh and seamless. Her rapid fire delivery floors you. I’ve read a lot of YA fiction recently and this book stands out in the genre (or any genre, really).

As it happens, Simmone is also a local (for the moment, anyhow). I first saw her on stage at Castlemaine Word Mine, hosting a session with Martine Murray and Sally Rippin, and we recently did a session together (with Ellie Marney) on teen fiction.

Here I speak to her about writing, nostalgia and folk music …

When did you move to Castlemaine? What drew you to the area?

I moved here in 2008. I wanted to try living in the country and Castlemaine had good coffee, plus a cinema and a train to Melbourne …

How does the area inspire your own writing?

I’m yet to see if the area has inspired my writing. I’m not sure that it does except for the fact that I walk a lot more than I used to and as a result have more ‘forward thoughts’ … but I also seem to have less time to write them down. And I spend a lot of time dreaming of escape.

How does a writer survive in Castlemaine? Do you do other work as well?

I do a little freelance writing stuff here and there, and I run creative workshops with Lisa D’Onofrio. I live lean and am nearly always thinking of finishing a Grad. Dip.

You seem to be drawn to YA fiction, novels with strong and humorous young female voices. Does the teen voice come naturally to you?

Yes! Even when I write an old man character he manages to sound like a 15-year-old girl. (This could be a problem …)

You’re a writing mother. How does having a family influence the way you work? Your characterisation?

Having a family means I have more resources in one way – I am constantly being pulled into the child’s perspective and I think it also makes me very nostalgic about my past and the feeling of time passing. I think being a parent has made me a nicer person. Not sure if that helps with the novelling though. 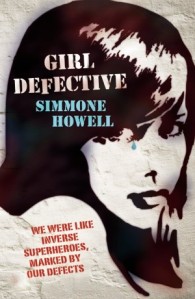 Your new novel, ‘Girl Defective’, seems to be about the importance of preservation (records, St Kilda’s iconic buildings) and an embrace of the vintage. Do you collect things? Are you drawn to record stores and op shops?

Yes and Yes. I have always been a collector and a cataloguer. I also love to throw things away and then mourn them.

‘Girl Defective’ has a wonderful sense of place. Why did you decide to set it in St Kilda?

I lived in St Kilda for a little while, and it was also the land of my teenager dreams. It always seemed like a mythical place to me – like Australia’s version of Los Angeles where everything is surface and the darkness is never far away. I love the history of St Kilda and the geography. I’m not sure if I would live there again so it was great to be able to live there vicariously through Sky.

Sky seems to be a girl coping in many ways on her own, with a lot of responsibility (her mother is absent, her dad relies on her to look after her brother). Do you think she is essentially taking on the parenting role in the narrative?

Yes. I think responsibility is one of the themes of the novel. Put baldly like that, ‘responsibility’ seems to be quite a boring theme, but when I was writing I was thinking a lot about the roles that people take on, how we can fall into them without wanting them, and then, sometimes surprisingly, be good at them.

You’re currently working on your latest novel. What’s the process? Do you research extensively? Or do you hit the ground running once you’ve found a character?

No research unless I really have to. I’ve been quite good about writing forward. With Girl Defective I remember I changed the tense about fifty billion times, re-writing the book each time … with my current manuscript I’m playing around with the voice. I’ve been writing it in 3rd person, but now I think I’d quite like it to be in 1st. Basically my process is to write something and then at a crucial point in the narrative go back to the start — this way it takes me years to finish.

Are you a writer who likes to stick to a routine, who finds comfort there, or do you embrace spontaneity?

I would love to stick to a routine, but I seem unable to. My only routine now is that I use the software Freedom which allows me to turn off the internet.

You’ve worked in other genres including an award-winning screenplay. What drew you to film, and how does writing a short film differ from narrative fiction.

I love films. I spent most of my teen years lurking at the video store slowly working through actors and genres … the short film Pity 24 came from a short story which was basically an oral biography, so in that instance there wasn’t a lot I had to change. (The film is like a fake documentary, though not a ‘mock’ documentary because no-one’s being mocked in it … I think there’s a difference.)

Actually I find screenwriting really challenging. I would love to adapt one of my books but think I might need a bravery injection first.

You’ve been successful in exporting your fiction internationally. Do Australian writers in YA stand a chance in the US market?

Definitely. There is a lot of love for Australian YA in the US. Margo Lanagan, Melina Marchetta, Jaclyn Moriarty, Marcus Zusak, John Marsden — the big names here garner a lot of respect there. Very generally speaking, I think they love the ‘direct’ Aussie voice. My writing has been called things like ‘unvarnished’ and ‘raunchy’ in the US and for some reason it feels like a compliment!

You have recently hosted a local radio show, Folkish on Tuesday mornings (currently in hiatus). What are your top 5 folk tracks (at the moment)?

Simmone’s earlier novel Notes From The Teenage Underground won the Victorian Premier’s Literary Award for YA Fiction and the Gold Inky in 2007. The short film Pity24 won an AWGIE for screenwriting.

A UNIQUE VOICE IS SO IMPORTANT IN FICTION … WHO ARE YOUR FAVOURITE WRITERS — WHO MANAGE TO CREATE A VOICE SO MESMERISING THAT YOU DON’T WANT TO LET GO?

IF YOU ENJOYED THIS, YOU MIGHT ALSO LIKE TO MEET LOCAL WRITERS JON BAUER AND ADAM FORD …