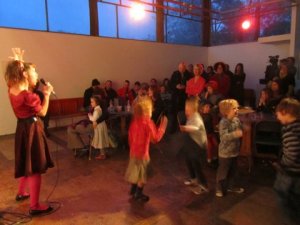 Although my book just_a_girl was released on the first of June, it’s taken a while to move through the launches.

The Sydney launch took place upstairs at Gleebooks and was like worlds colliding (as Emily Maguire put it). As I stood up to do my speech, I could see my first boyfriend (who knew me when I was just a girl) smiling near the front, along with my current and former bosses seated near the back, and then my dad, sister and a whole line-up of family in the mix. My two best friends were there, along with writers new and old. And Sue Woolfe, my wonderful supervisor and brilliant author. Then there were old friends of my mum’s. And people I’d never met before who were intrigued by the premise.

It’s heady, this collision of people from your past and present. The word that people kept using when they approached me was ‘proud’ and I was so humbled by their support and comments. It showed people really do understand what a hard slog it is, writing and publishing a novel, full of setbacks and then the excitement of getting to print.

I asked Emily Maguire to launch the book and she came in with guns blazing. I’ve always been so inspired by Emily, as both a fiction and nonfiction writer. She is interested in teenage girls and women, how they operate, how culture defines them, how they throw off expectations. Her first book Taming the Beast was a revelation and her latest Fishing for Tigers was a winner of the SMH Best Young Australian Novelists for 2013 (that I was lucky to help judge).

In the speech, Emily spoke of her teenage years, how (like me) she was boy-crazy, and how she reconciled this with her evangelical Christian background. As she spoke, I was so excited and engrossed by what she was saying that I forgot to get nervous — now there’s a great intro! I was most touched by the following line that Emily said about my writing:

I don’t believe there’s any character she couldn’t get me to empathise with, any story she couldn’t make me care deeply about. 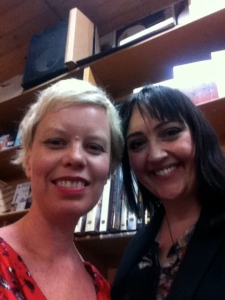 Emily Maguire and me, selfie

I always hope to write my characters with compassion and conviction (even if they aren’t always likeable) and I’m glad that Emily could see that. My clever husband Damon took a video of the launch and it’s now up on YouTube, so here’s Emily in action on the night. (You can also read a transcript of her launch speech). And if you watch Emily until the end, you can see my Academy Awards moment and a reading from just_a_girl — where Layla swears, meets a moth, and a mysterious man, on the train.

In between the launches, I visited Readings in Carlton to sign some books (and learnt the term ‘face out’ as I begged them to feature it alongside The Rosie Project), did a Q+A at Colour Box pop-up bookstore with Angela Savage in Footscray, and  my first ever radio interviews with Alicia Sometimes (3RRR) and Jan Goldsmith (3CR), where luckily I managed a velvety sexy voice because I had a virus I couldn’t shake off.

The turn-up for the Castlemaine launch was wild and woolly. As in Sydney, the weather wasn’t kind, but Castlemaniacs entered Lot 19 by the bucketloads. I asked Ms Evie and Johnny Danger (from the kids’ punk band Itchy Scabs) to sing the title song of the book (No Doubt’s Just a Girl) and they followed up with Trouble from Pink. Local kids slammed in the moshpit and through the speeches as well. My two-year-old daughter ate a whole bowl of popcorn and double dipped in every bowl on the table.

Angela Meyer managed to raise her voice above the din and again did a beautiful speech to launch just_a_girl. Angela blogs regularly at LiteraryMinded and is a wonderful fiction writer. She also taught me how to get my blog up and running. She is heading off to Scotland for months (months!) to host some panels at Edinburgh — so bon voyage, Angela!

I chose the same part of the novel to read to the Castlemaine audience (so I won’t bore you with the video again) as my son’s Lightning McQueen and various race cars whizzed past my feet. I was looking for a G-rated version to read, considering all the kids, but it wasn’t too easy to find! I had to tone down Layla’s favourite swearword, Fuckadoodle! My son said later that he liked it when everyone went quiet and my voice came out of the speakers. I guess that’s the best feedback I’ll ever get. 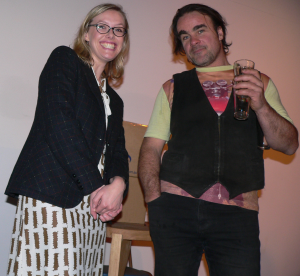 Being in the public eye for a while can be a surreal experience. The local paper had a large photo of me (in the lead up to the launch) with the accompanying title: Lolita with a webcam. I found myself last Friday sitting in my office, staring out at the frosty clothesline, talking on Radio National’s Life Matters about moving from Sydney to Castlemaine and how social media can act as an anchor when you arrive in a new place. Today I published an article on the Wheeler Centre blog about the dangers of social media for teenage girls. This Thursday (25 July) I’m doing a ‘live’ author chat at Allison Tait’s Pink Fibro Facebook book club about writing a first novel, judging literary awards and editing a magazine for writers. I hope you all can come along and join me, and ask lots of questions…

In a recent post I mentioned Susan Cain and her TED talk on introspection. She talks of her ‘Year of Talking Dangerously’. In her spirit, in the upcoming months, I have decided to say ‘yes’ to everything, and see where I end up. I’m sitting up the front on the rollercoaster.

WHAT ABOUT YOU? HAVE YOU HAD YOUR 15 MINUTES OF FAME? DID YOU ENJOY OR ENDURE IT?