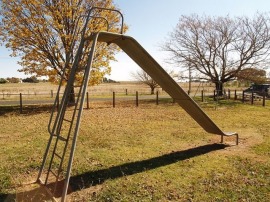 In my day the slippery dips (they weren’t called slides then) were made of steel and you’d burn your bum as soon as the heat went above 26 degrees.
In my day there were no shade cloths to protect you from the sun. That’s why I’ve got so many goddamn freckles.
In my day, if you fell off the monkeybars, you fell onto grass. Or even worse, gravel. Or, if the teachers really hated you, cement. (Now it’s the much softer artificial turf — only a problem if you’re worried your children will get cancer from toxic waste.)
In my day roundabouts went so fast you could actually fall off from the giddy speed and hallucinate for hours afterwards.
In my day you could play on the seesaw and suffer a bone-crushing spinal injury when a big kid jumped off the other end while you were still in the air (oh, happy days).
In my day the flying foxes went into the tree.
In my day the slippery dips weren’t gently tapered at the end; they fell away dramatically so you’d get a mouthful of dirt if you came down forwards.

But in my day I never encountered a Variety Playground. 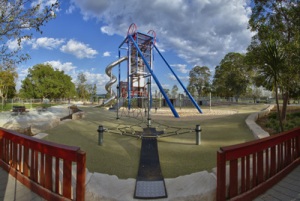 I took McCool (my three-year-old son) to a new park yesterday, the Lake Macquarie Variety Playground (yep that’s its official title) in Speers Point in Newcastle, and we both ended up having panic attacks.

His was at the start of the day. He fell asleep in the car (not a good start) and had to be woken up. ‘Wake up, we’re at the park!’ I always talk in exclamation points to him these days. He said ‘I want to go home’, ‘I want to go to the café’ ‘I want some banana bread’ ‘No, mumma, I DO want to play’ in the three minutes it took him to meander out of his carseat. He was starting to work up to a tanty.

And then we both saw it. A metallic rocket pointing to the sky. He started moving towards it as if being drawn in by a religious cult, his eyes fixed greedily to the top of the three-storey slide. As he scampered up the ropes to the first level, I realised this monstrosity had been purposely designed to keep parents out. By the time I had negotiated the maze to almost reach him, McCool (did I mention he is three years old?) had climbed into an enormous monkey cage, where teenagers and toddlers screamed, swinging arm in arm, embracing the Darwinist theory of evolution full throttle.

As he continued to scale up up up, without a thought in my direction, I realised that my anxiety was as much for me as him. I did not want to go in there. This was a mummy test. Ladders, cages, vertigo, tigers. A vertical maze. Who knew what awaited me? But my mum was down the bottom, staring up at me, looking more and more demanding as each child ‘not McCool’ emerged from the slide at silver speed. She pointed with one finger. Up. I gestured bravely as if that had always been my intention.

I entered the warren of ladders and cages, landing on sore ankles, jarring knees, after each step. When I was almost to the top, I saw my son, yeah there he was, down the bottom, apparently safely shot out of the slide cannon, happily articulating to grandma. Dodged a bullet there. As I wound my way down slowly against a barrage of kids, she yelled up at me, ‘he wants to go again!’

This time we went up together, but I became even more of a liability. ‘Can you come down after me?’, he pleaded, his three-year-old logic working the usual miracles. I did my best. I really did. Waiting in queue — while children with flailing limbs assaulted us from all sides —miles off the ground, I watched the flimsy slide bounce and shake as a hefty dad took his daughter down helter-skelter.

And all I could think of? Two words. Newcastle. Earthquake. All these kids falling to the ground. The slide falling away like a used condom. Soiled. Well, enough metaphor already. All of us dead, actually.

I thought I did my job. As a mum. I got McCool to the slide. I asked a dad behind him if he could keep an eye. I got the hell out of there, down the ladders, the way I had come. But at the bottom? Nothing. Minutes passed. Not a sign of him. I was not going back in there. I looked at mum. She gave me the finger again. Well, okay, I started moving tentatively back. And then I saw him. In another man’s arms. Down down down. He’d asked a dad to carry him down all the ladders. He didn’t seem the slightest bit anxious. But he didn’t want to go down the slide again. Not without me behind him.

In my day I would have gone down that slide. What has happened to youthful recklessness? With motherhood I’ve become like Meryl (Justine Clarke) in Sarah Watts’ wonderful Look Both Ways, endlessly catastrophising — only I don’t do it artistically, in beautiful animations.

I just breathe heavily, close my eyes, and want to get out of there.

What do you remember of playgrounds? Were they a time of fun, or fear? Let me know your stories, childhood or parental traumas…